Here is my entry for this month’s Great Cakes Soapworks challenge. This is my attempt at a Clyde Slide. 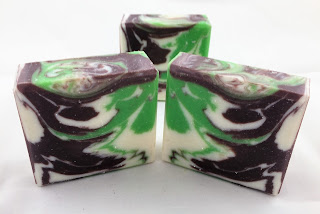 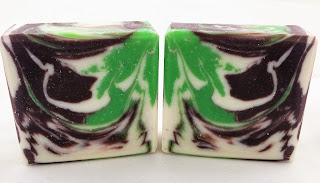 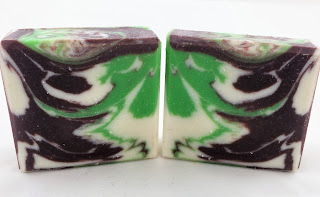 This was a hard technique for me. It took me several attempts to achieve the feathering which is the signature of this technique. I am pleased with my entry though in the end!

I wanted to do something a bit different with my pour for this challenge. My aim was to pour the white base colour in at the back of the bowl and simultaneously pour the brown and green so they met in the middle. The aim was to produce a soap that had a different colour on each side rather than a homogeneous mix of colours, which I feel I managed to achieve. I quite like the symmetrical look that it creates.

Here is a picture of the bowl as I poured. I used a washing up bowl to pour into as I found that using the regular jug that I make soap batter in didn’t seem to have a big enough surface area. I was trying to find something similar to the big round bowl Clyde uses in his videos. I waited until I had reached a medium trace before pouring. 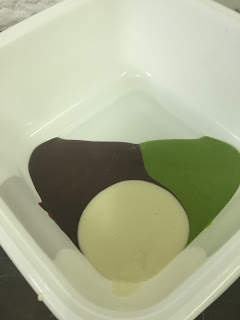 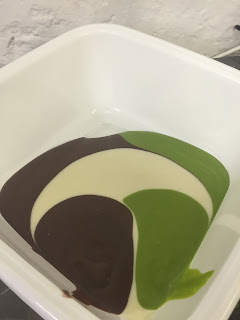 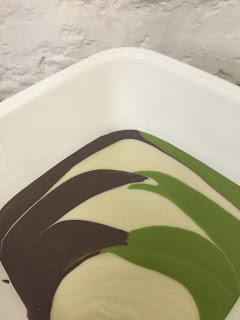 I propped the left hand end of the log mould up slightly by about an inch and poured in one solid sweep from left to right, then laid the mould back down flat.

I chose a standard recipe with palm, olive, coconut and sunflower oils. I have been thinking about making Christmas soaps recently which is why I chose the colour scheme, it reminds me of peppermint creams so I scented with a peppermint fragrance oil. I used brown and green mica from White Ape Pigments and titanium dioxide. 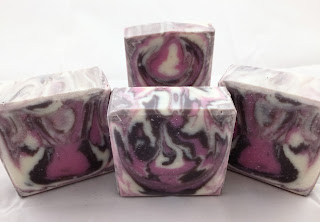 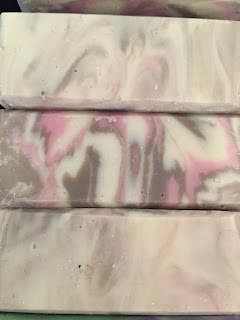 I cut the top off one of the soaps to trim it down and it looks like there are some lovely feathers in the horizontal plane too. It might be cool to try cutting the soap that way next time instead to see what is revealed. 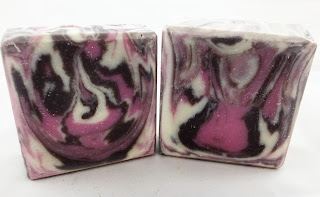 I think the one on the right looks like an angel.

I feel like I should write a separate blog post called  ‘How not to do a Clyde slide’ as it took  me quite a few attempts to get the technique to work how I wanted it to! Here is a run down of what I learnt the hard way if you are interested in reading it.

Amy’s tutorial said that pouring the batter too thick would prevent the feathers from developing. I think I took this too literally with my first attempts. I poured them so thin that the autumn coloured soap which started out as several lovely shades of red, orange and yellow, turned into an unpleasant homogeneous brown. 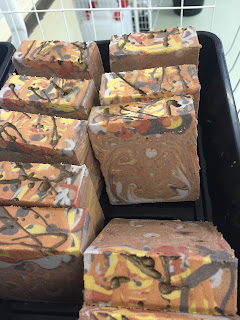 My second blue attempt was slightly thicker trace, but I still didn’t achieve any feathers. I think the soap still turned out fairly pretty though. I poured the grey base background, then poured pools of dark and light blue on alternative sides of the pot to try and achieve a soap which was half dark and half light, similar to my entry soap but in a jug. The soaps are really pretty and I like them a lot, but they don’t demonstrate the feathering at all. I think this was because the batter was too thin and the jug too cramped. 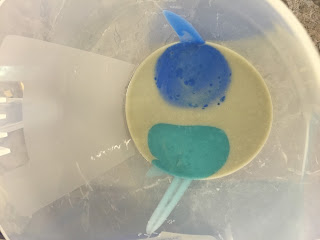 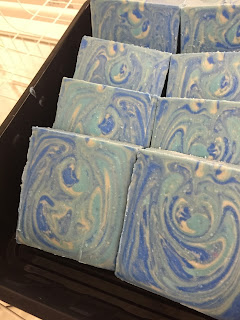 My third attempt was a green, blue and white soap. This time I waited much longer before pouring and I chose to use a mixing bowl with a much larger pouring surface area than the plastic jug I had originally been using. This is the first time I actually achieved any feathers at all. I think this shows that the type of container you use to make your pour into is very important, you need a large surface area. I think you also need your trace not to be too thin or you end up with too much mixing and the
feathers won’t appear.
I think these bars look like they have smiley faces. 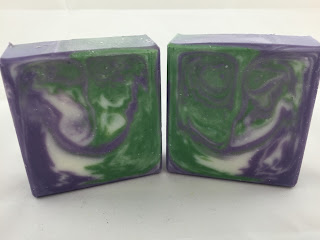 I will definitely be using this technique again. I love the way it produces such different results each time, and I always seem to be able to see images and pictures in the bars. Thank you to Amy and Clyde for bringing us something really  new and different to try.