This month’s challenge was incredibly challenging for me. I had so many goes at this trying to nail it, I think I will have enough soap to wash with for fifty years! I finally achieved a droplet that I am happy enough with to enter so here it is! I only poured a small amount of batter into the bottom of the mould before pouring in my droplet colours as I like the droplets which have a long thin stem.

My bars are scented with a blend of spearmint, lavender and rosemary essential oils hence the mica colours that were chosen.

The mica was purchased from http://www.u-makeitup.com/ and the colours used were purple passion, lime, dreamy aquamarine and some titanium dioxide and activated charcoal for the black.

I thought I would also post some of my other attempts in order to show you how challenging I found this challenge to be. Getting a droplet shape was not easy for me!

I loved the colour of these and all the layers within the droplet, In real life they look much brighter and more vibrant. I was gutted that the outline turned out wobbly. I think it was because I poured the sides with a squeeze bottle rather than a jug so the pressure forced the batter into the mould unevenly.

I was also disappointed that this attempt wasn’t a better shape. I allowed the central batter to touch the sides which resulted in the teardop having a line underneath it. There were also lots of other attempts, some with no droplet at all, others with triangular shaped patterns and one where I used an accelerating fragrance which set up on me so fast that all I got was tiger stripes across the middle of the bar.

And here as promised are my other six attempts!!!

Thank you for another great challenge Amy 🙂 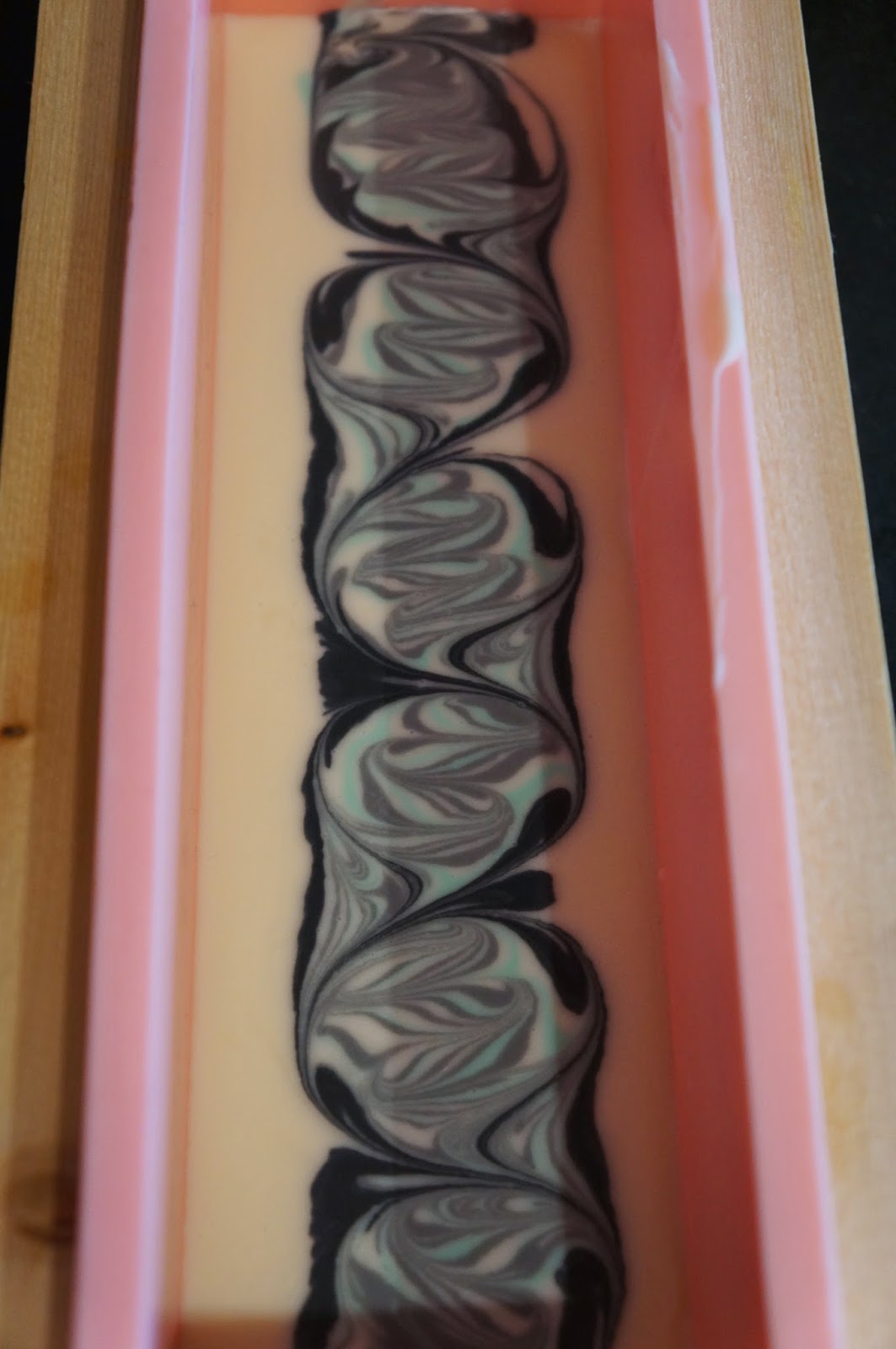 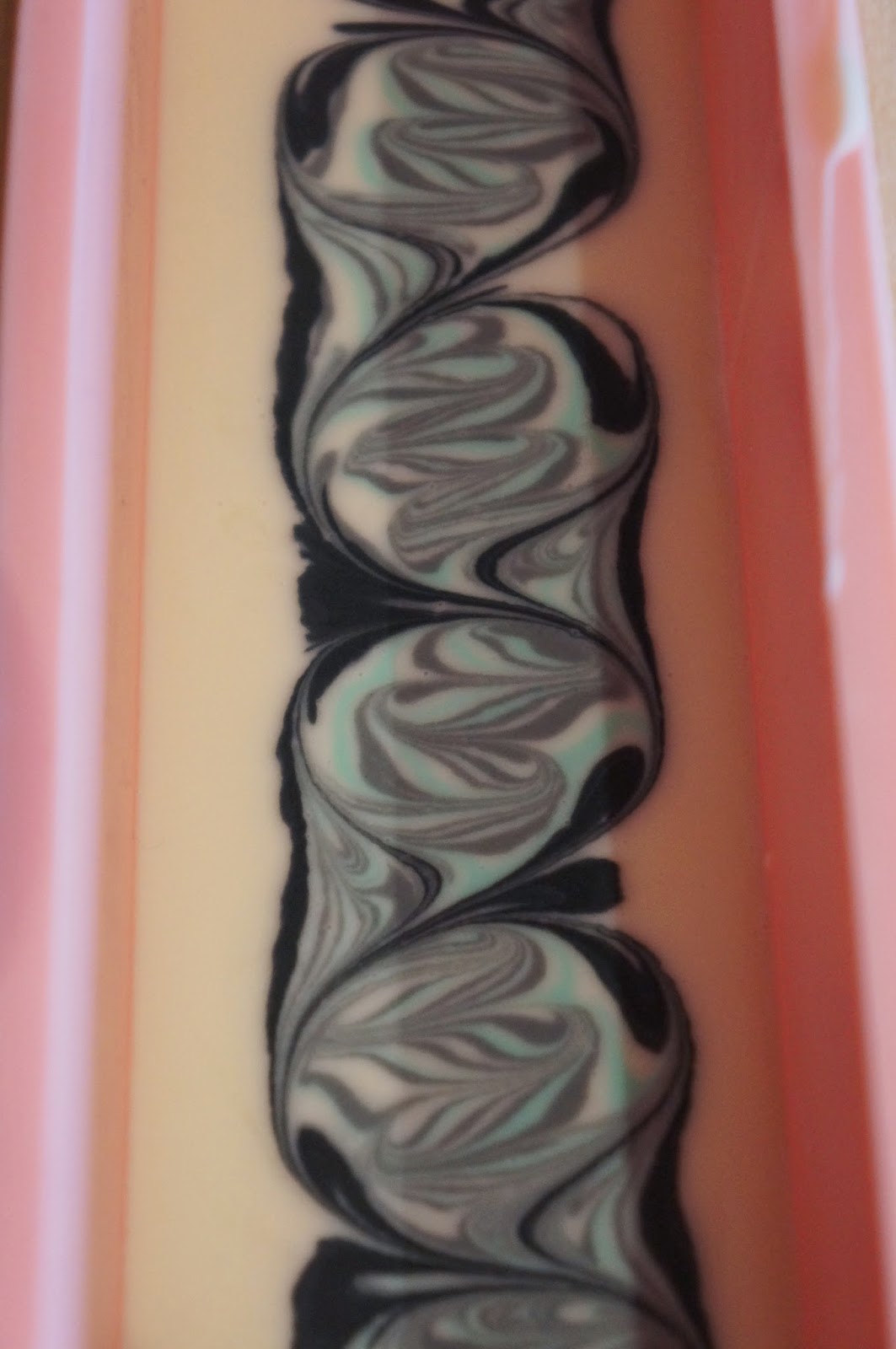 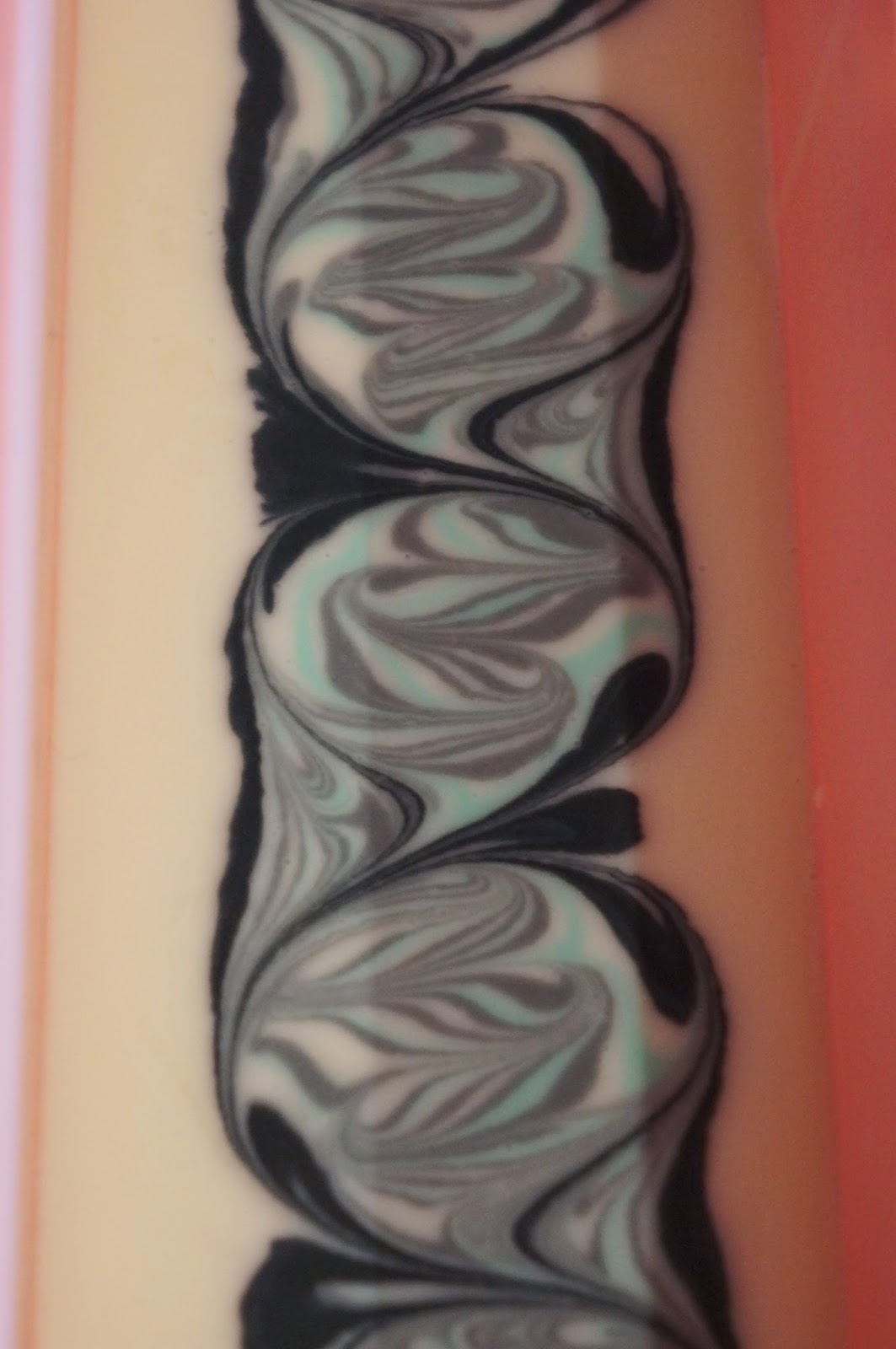 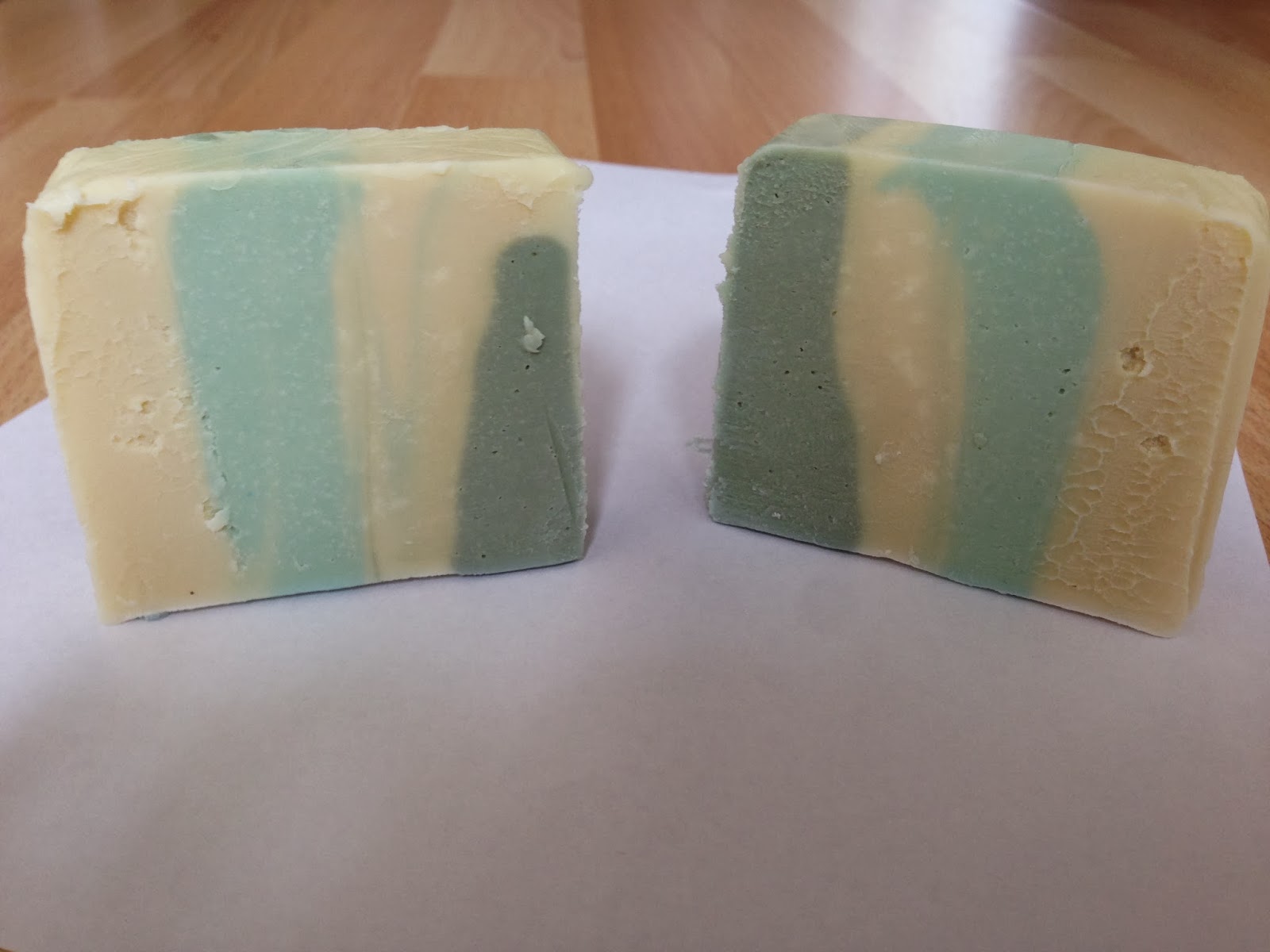 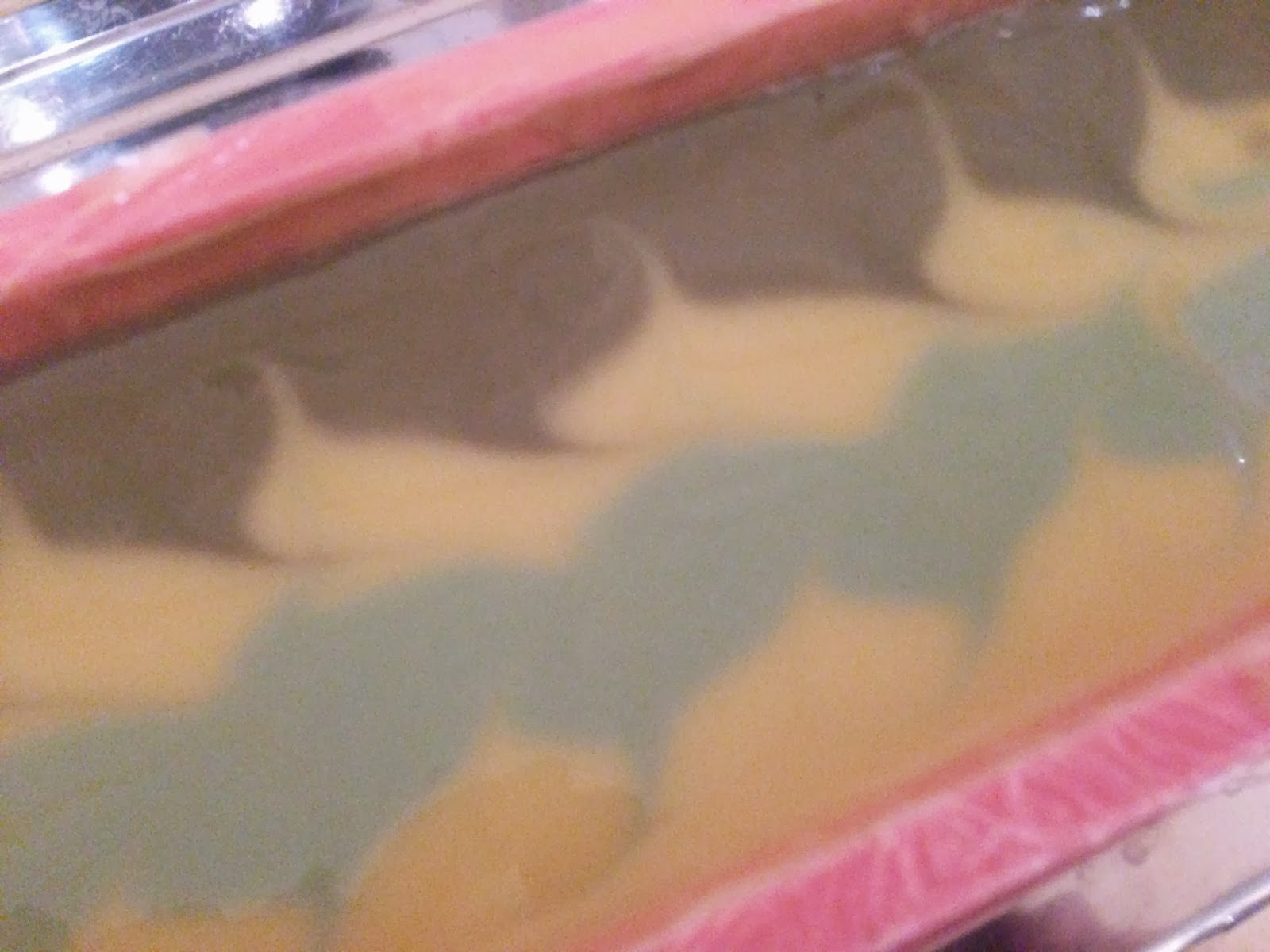 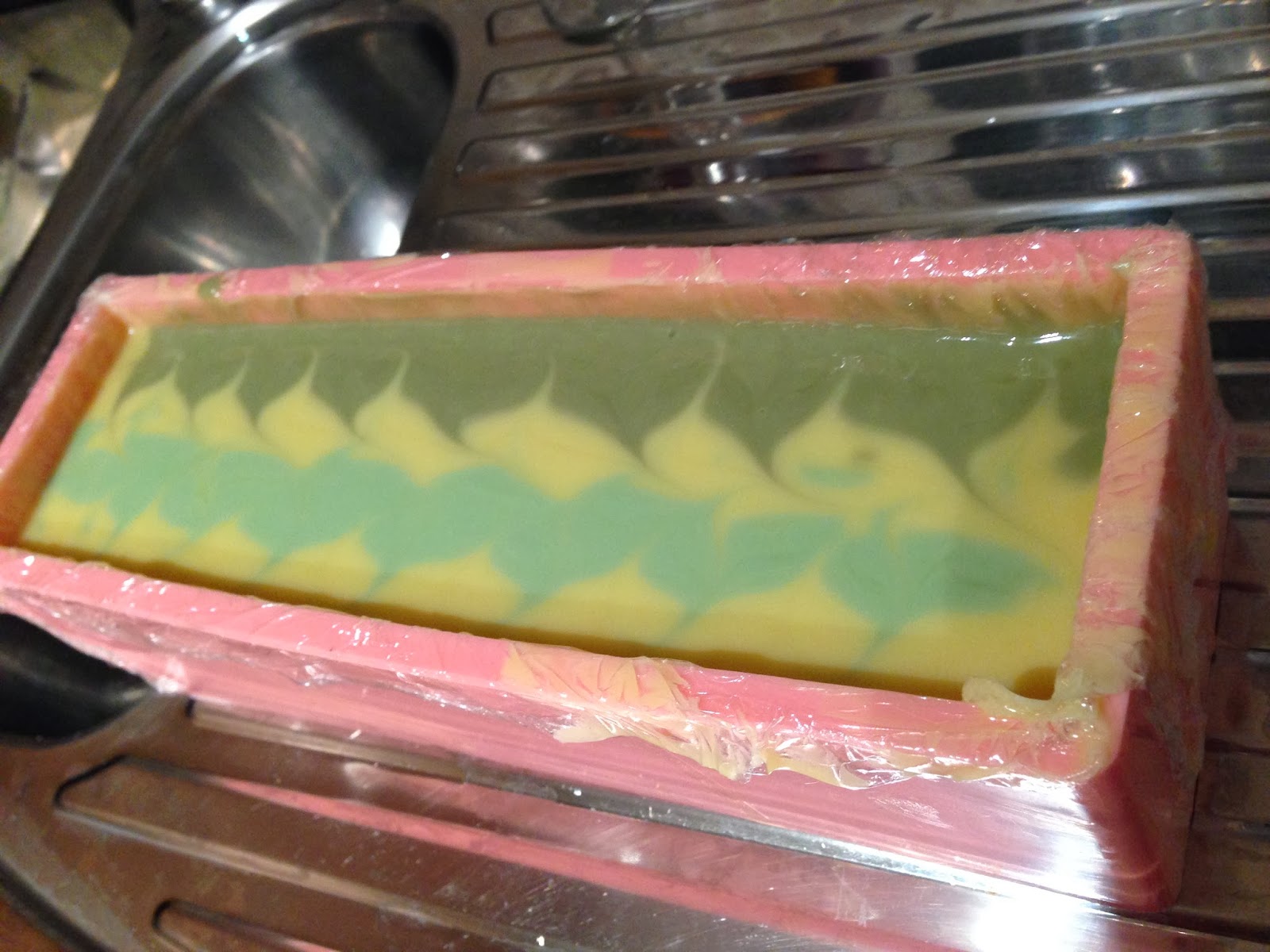 How to deal with a curdled disaster!

Unfortunately I forgot to take any photos while making this so the post is going to look a bit boring. This soap started out as a disaster for me but I managed to remedy the situation and ended up with a really nice bar of soap in the end. I have outlined below what went wrong, how I remedied it and what to do to prevent this happening to you.

This soap contains lots of really rich oils to provide lots of moisture for sensitive facial skin, along with kaolin clay to cleanse and gently exfoliate dead skin cells.

Please read the health and safety instructions, and the whole post before attempting this recipe.

I have done some research and there are several things you can do to prevent the soap seizing so badly when you add certain fragrance oils. I will give these methods a go next time I work with fragrance oil.

1. Add your fragrance oil to the melted oils before adding the sodium hydroxide as the effects of the fragrance oil will be diluted by the other oils.
2. Mix the oil and sodium hydroxide together at a lower temperature to prevent the mixture reaching trace as quickly.
3. Make your soap base with a higher amount of liquid oils as this will also slow down trace.